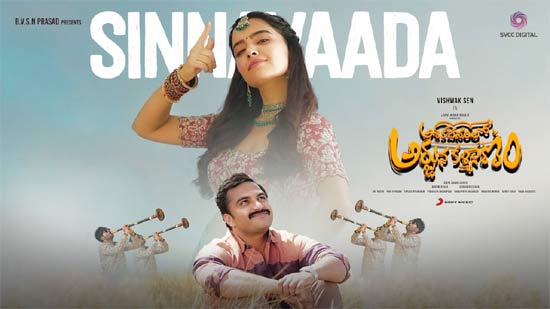 Mass Ka Dass, Vishwak Sen’s upcoming movie, Ashoka Vanamlo Arjuna Kalyanam, is all set to release in theatres on March 4, 2022. Ahead of the release, the makers have unveiled the second single from the movie today.

Titled Sinnavaada, the song, which is about the male lead, is good to listen to because of the energetic vocals of Ananya Bhat. Gowtham Bharadwaj also crooned this song, composed by Jay Krish.

The usage of traditional beats makes it a good one. Featuring the actress, Rukshar Dhillon, the song has good visuals. Sanapati Bharadwaj Patrudu’s lyrics are also fine.

Produced by SVCC Digital, the movie is directed by Vidya Sagar Chinta. The promotional content released so far has increased the hype on the movie.