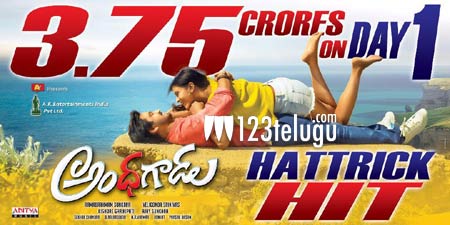 The just released romantic entertainer, Andhhagadu, has hit a hat-trick for Raj Tarun and also for his pairing with his lucky mascot, Hebah Patel. Andhhagadu has also given a hat-trick for the film’s producer Anil Sunkara.

Now, as per the latest update from the film’s makers, Andhhagadu has collected a decent Rs.3.75 crore worldwide on its opening day. This is the career best opening number for Raj Tarun. The movie is enthralling movie lovers with continuous twists and turns.

Veligonda Srinivas has turned director with this film. Senior comedy hero Rajendra Prasad is seen in an important role in the movie.