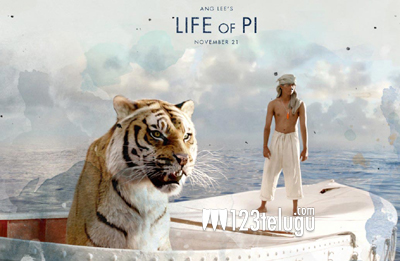 Acclaimed director Ang Lee, who’s famous across the world for films like Crouching Tiger, Hidden Dragon, Hulk and Brokeback Mountain, is coming up with a new 3D film titled Life of Pi. The film starring Suraj Sharma, Shravanthi Sainath, Irfan Khan and Tabu is based on a book of same name written by Yann Martel. Made on a budget of $100 million, the film’s first look has already created a lot of buzz across the world and it’s currently being shown at several international film festivals. In November, the film will be screened at the 43rd International Film Festival of India, Goa and the film is expected to release across the country shortly after that. Fox Star Studios which is distributing the film in India has decided to dub the film in Telugu, apart from Tamil and Hindi. The film narrates the story of 16 year old boy named Pi who miraculously survives after the ship he was onboard sinks and his incredible journey on a lifeboat where he finds himself with a Bengal Tiger, Orangutan, a zebra and a hyena. More details about the film will be revealed soon.