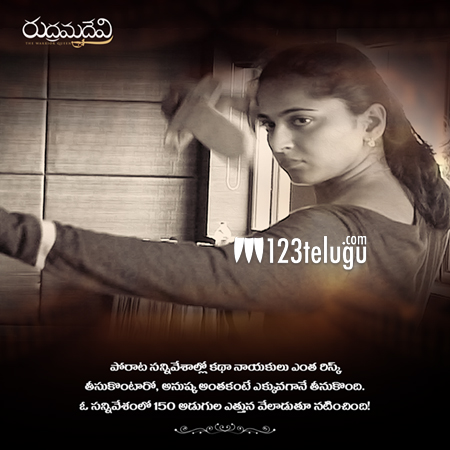 Gunasekar’s upcoming film, Rudramadevi’s shooting is going on at a brisk pace. Anushka plays the lead role in this female oriented film. Reports reveal that Anushka has performed all the stunts by herself. According to the sources, she has done a risky fight at a height of 150 feet. Anushka has also learned sword fighting and horse riding for this film to the give it a realistic approach.

Directed and produced by Gunasekhar, Rana will be playing the male lead while Allu Arjun plays the crucial role of Gona Gannareddy. Catherine Teresa is playing Bunny’s wife in this period drama. This movie is a bilingual and it is shot simultaneously in Telugu and Tamil.