Anushka to watch Bhaagamathie with her female fans
Published on Feb 3, 2018 3:00 pm IST 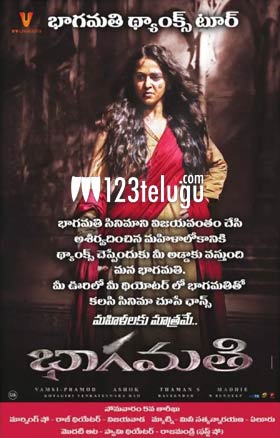 Anushka is quite thrilled with the success of her latest release, Bhaagamathie. This high-budget horror thriller has collected nearly 28 crore worldwide share in its opening week. To celebrate the success with fans and also promote the movie, Bhaagamathie’s team is going to organize a grand success tour in several towns in Andhra Pradesh.

Bhaagamathie’s success tour will flag off on Monday (Feb 5). Special screenings of Bhaagamathie will be organized exclusively for female fans and Anushka will be watching the movie with them. Following is the success tour’s schedule: Morning Show at Raj Theater, Vijayawada. Matinee at Mini Satyanarayana, Eluru and First Show at Swamy Theater, Rajahmundry.