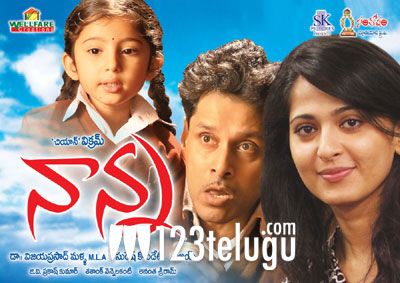 Nanna, the critically acclaimed film starring Vikram, Anushka and Amala Paul bagged the award for ‘Most Entertaining Film’at the prestigious Osaka Film Festival in Japan. AL Vijay had directed this film and it released in 2011 in both Tamil and Telugu.

Vikram essayed the role of a mentally challenged person who fights for the custody of his child. Music for this film was composed by G.V.Prakash and the film won rave reviews from all corners. Vikram, Anushka and Amala Paul delivered impressive performances in this movie. Congratulations to the team of Nanna for achieving this rare distiction.