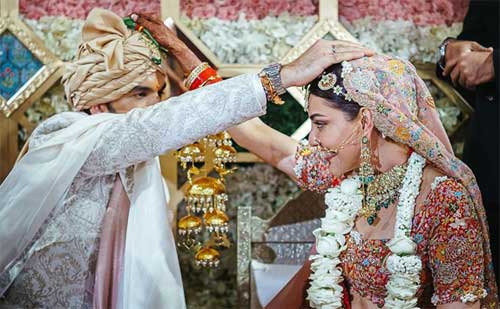 Star heroine Kajal Aggarwal tied the knot with her boyfriend Gautam Kitchlu in an intimate ceremony at a star hotel in Mumbai last night. Congratulatory messages have been pouring in for the newlyweds from fans and well-wishers from the film industries across the country.

Joining the long list of celebs who wished Kajal on her memorable phase of life is star heroine Anushka. The Nishabdham actress took to Twitter and wished Kajal and Gautam with a beautiful quote. “The highest happiness on earth is the happiness of marriage. Two souls with but a single thought; two hearts that beat as one,” Anushka tweeted, also wishing them a blissful married life.

On the other hand, all eyes are on Anushka’s wedding. Even though there have been numerous speculations for the last few years, Anushka has not made any announcement regarding her wedding.

The highest happiness on earth is the happiness of marriage…Two souls with but a single thought; two hearts that beat as one…..💕Wishing a blissful married life to Dear @MsKajalAggarwal & Gautam 💐
Congratulations to u Both 🤗#KajGautKitched pic.twitter.com/5oiMc7X47j