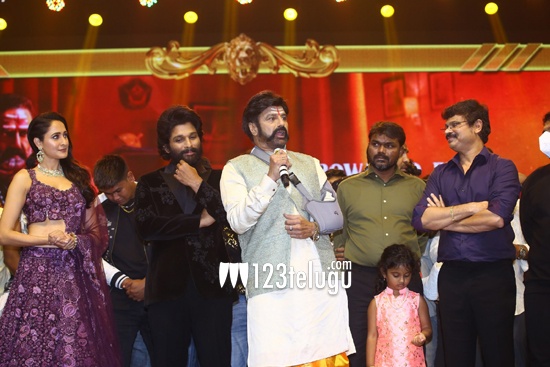 Speaking at Akhanda’s pre-release event tonight, the film’s hero Balakrishna urged the governments of Andhra Pradesh and Telangana to extend their support to all the movies that are scheduled to release in the coming days. Balayya said that Tollywood filmmakers had braved numerous challenges posed by COVID-19 and made movies and that the governments of the twin Telugu states must encourage them.

Balayya said that he was very happy to have his good friend Allu Aravind’s son and hero Allu Arjun gracing his event as one of the chief guests. Talking about Rajamouli, Balayya said that not only the country but the entire world is proud of the RRR director. Balayya also talked highly of the Akhanda’s director Boyapati Srinu and the entire film. The senior star hero concluded his speech by wishing the upcoming biggies like Pushpa, RRR and Acharya.