Arabic Kuthu’s Telugu and Hindi versions to be out at this time
Published on Apr 4, 2022 2:02 pm IST 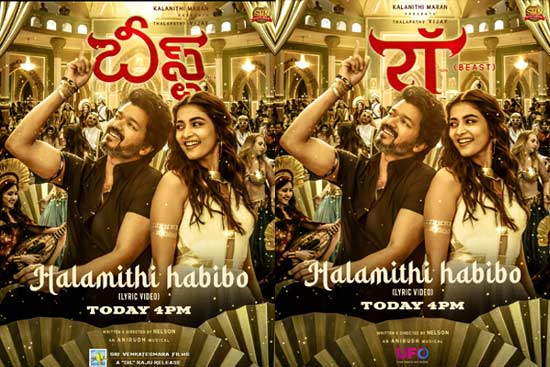 Kollywood star actor Vijay’s upcoming movie Beast is gearing up for a grand release in theaters on April 13, 2022. The makers have planned to release the film in major South Indian languages and Hindi.

As the release date is nearing, the team has kickstarted the promotions. As a part of it, the Telugu and Hindi versions of Halamithi Habibo, also known as Arabic Kuthu, from the movie will be released at 4 PM today.

Sri Sai Kiran and Raqueeb Alam have penned the Telugu and Hindi lyrics of the song, respectively.

Produced by Sun Pictures, the action entertainer has Selvaraghavan in a pivotal role. Anirudh Ravichander has scored the music for this pan-India movie.