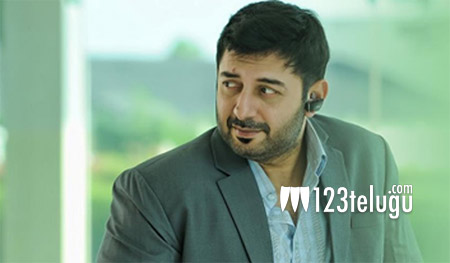 Aravind Swamy is a busy bee these days, thanks to the stunning success of Thani Oruvan. The actor has been flooded with offers ever since his role as Siddharth Abhimanyu caught everyone’s attention. Now, he is back with a string of films in which he has played the lead role.

One of his upcoming film is Naragasooran, which also stars Shriya Saran, Sundeep Kishan and Indrajith. The film was recently wrapped up in Ooty, and Aravind Swamy thanked his co-star Shriya Saran saying that it was a pleasure working with her and also added that the screen will be on fire, thanks to their chemistry in the film.

Karthick Naren, who directed this film, had earlier made news with D16, and the film has been produced by Gautham Menon’s Ondraga Entertainment banner.

A wrap 4 #Naragasooran ! Ty @karthicknaren_M & team! @shriya1109 a pleasure 2 work with U, the screen will be on fire-Geetha and Dhruva ❤️ pic.twitter.com/2Cs45O4THK