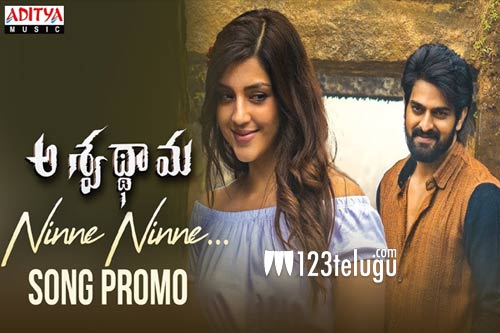 Young hero Naga Shaurya’s latest home production, Aswathama, is hitting screens on January 31. Apart from producing the film and playing the main lead in it, Shaurya has also provided the film’s story.

Meanwhile, the makers unveiled a small video glimpse of a breezy romantic number ‘Ninne Ninne’. The song is shot in a picturesque hill station and it showcases the chemistry between Shaurya and his leading lady Mehreen. The song has been crooned by Armaan Malik and Yamini Ghantasala and it’s penned by Ramesh Vakacharla.

Sricharan Pakala is the film’s music composer and Shaurya’s mother Usha Mulpuri is the producer. Debutant Ramana Teja is directing the movie. Stay tuned for the full song.