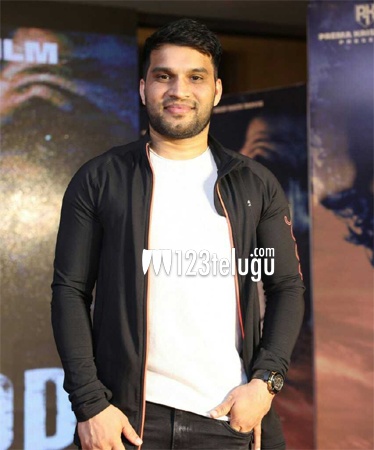 ‘Muddy’, India’s first mud race movie made at a pan-India level, will have its theatrical release in Telugu, Kannada, Hindi, Tamil, and Malayalam in April last week or May first week. This unique action adventurous thriller is directed by debutant Dr. Pragabhal. The film features Yuvan and Ridhaan Krishna in lead roles.

Muddy’s teaser was launched a few days ago to a thumping response from movie lovers. As the teaser clocked over 10 million YouTube views, Muddy’s team interacted with Telugu film media this evening. Here’s a brief interview with Muddy’s director Dr. Praghabhal.

I am a Ph.D. in Management. Our team has worked very hard for 5 years to present a unique film to the audience. After finding my across, I gave them 2 years of training in real mud race with a professional trainer. We realistically shot the races and chases on real mud racing tracks and real modified vehicles. You will see 3 mud race patters in the film.

Sound and visuals play a huge role in these kind of films. So, I approached KGF fame Ravi Basrur for music and re-recording. Hollywood cinematographer KG Ratheesh shot the film brilliantly – Dr. Praghabhal. Produced by Prema Krishnada under PK7 Creations banner, Muddy is slated to release in April last week or May first week.