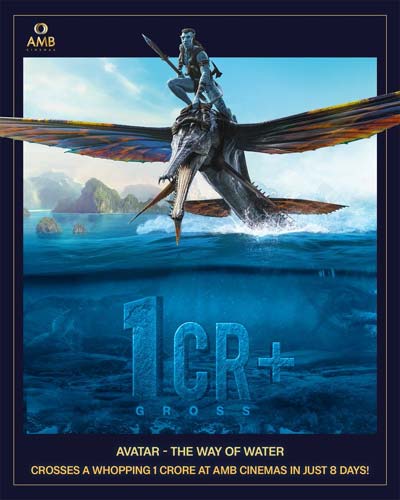 James Cameron is one of the legendary filmmakers in the world who have introduced newer kind of technologies. Back in 1997, he was able to pull off a great film like Titanic, the scale and production design of which amazes us even today. Now he has come up with Avatar 2, which is doing good business.

The latest news is that the film has crossed the one crore gross in Hyderabad’s most prominent multiplex AMB Cinemas. The Hollywood biggie has achieved this whopping gross of one crore just in 8 days of its release. Only a few films have achieved this feat, and Avatar 2 has done it in a very quick time.

The film has done phenomenally well in Telugu states and is expected to have a good run for a few more weeks. However, at the worldwide box office, the film is inching closer to the 1 Billion $ mark and needs to hold well to attain the breakeven mark.