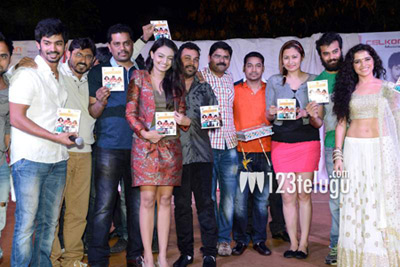 The audio of Madhura Sreedhar’s upcoming film Backbench Student was launched last night in Hyderabad. Mahat Raghavendra is making his debut as a hero in Telugu cinema with this film and it also stars Piaa Bajpai and Archana Kavi. Rana, Jwala Gutta, Dasarath, Kona Venkat, BVS Ravi, Tammareddy Bharadwaj, Sundeep Kishan, Nikitha Narayan and Varun Sandesh were some of the guests who graced the event. Mahat and Piaa Bajpai anchored the event.

Three songs were launched before rain played spoilsport and later Jwala Gutta launched the audio and the film’s theatrical trailer was unveiled. Sunil Kashyap has scored the music. MVK Reddy has produced the film. The album also features a remix of Jagada Jagada, a superhit song from Geethanjali and it has been sung by Tamil actor Simbu. The film is expected to hit the screens shortly.