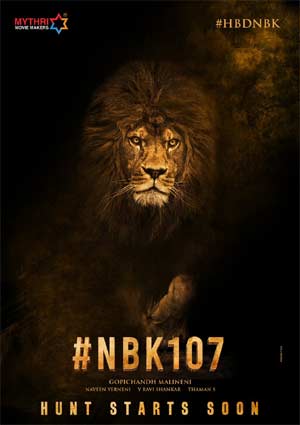 On the occasion of hero Nandamuri Balakrishna’s 61st birthday, the makers of his 107th film launched a striking birthday teaser and theme poster. This as-yet-untitled film is being directed by Gopichand Malineni and produced by Naveen Yerneni and Y Ravi Shankar under Mythri Movie Makers banner.

The video juxtaposes Balayya with a lion and the caption says that the hunt will begin soon. Star composer Thaman packs a punch with an electrifying background score for the motion poster. The makers revealed that Gopichand Malineni has penned a powerful script for Balakrishna and the story is based on true incidents.