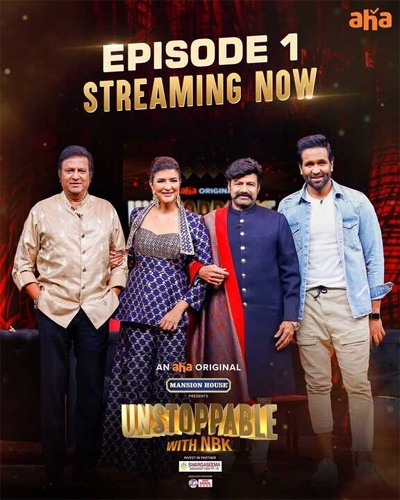 Nandamuri Balakrishna’s maiden talk show, Unstoppable is now available for streaming on Aha Video. The opening episode of the show has Manchu Mohan Babu, Vishnu, and Lakshmi in the guest roles.

In the inaugural episode, Balakrishna steals the show with his trademark mannerisms and lively presence. Balakrishna asks Mohan Babu about his relationship with Chiranjeevi.

To which, the latter replies “Chiranjeevi is a good actor. On the personal front, I hold nothing against him. I have nothing negative to say about him.”

Mohan Babu then asks Balakrishna why he didn’t take charge of TDP after Sr NTR passed away. Balayya responds, saying “TDP runs on rightful leadership. It has nothing to do with hereditary. We all felt Chandrababu is the right man to lead the party. We continue to back him as the captain of the ship.”

Balakrishna then went on to shake a leg with Manchu Lakshmi and Vishnu. Vishnu revealed that he has registered the title “Danchave Menattha Kuthura” which happens to be the name of one of chartbuster songs from Balakrishna’s films.

Vishnu requested Balakrishna to be an advisory member of MAA board and the latter readily obliged to the same.

The opening episode is a compelling one and it keeps us hooked. And the show is expected to get only better as more noted faces make appearances in the same. It is heard that Rana Daggubati is the next guest on the show.