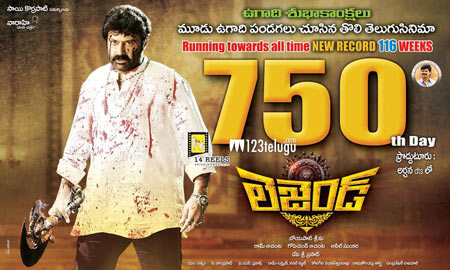 Released on 28th March 2014, Nandamuri Balakrishna’s Legend turned out to be the highest grosser of Balayya’s career. The film collected 40 plus crore share and enjoyed a solid theatrical run. Very soon, Legend will complete a historic 750 day run.

The Archana theater in Proddatur in Kadapa district has been screening Legend over the past 115 weeks, making it one of the longest running films ever in Tollywood’s history. Incidentally, Legend is that rare Telugu film which celebrated 3 Ugadis during its marathon theatrical run.