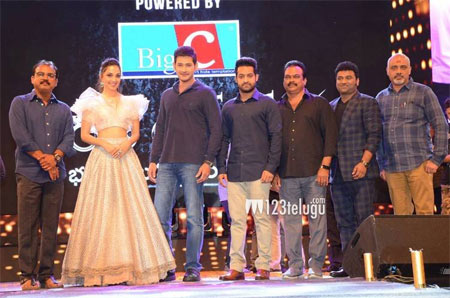 Bharath Ane Nenu’s pre-release event was one of the biggest functions in the recent times. The event was held on a very grand note and things became so colorful with the presence of both NTR and Mahesh on one stage.

The way the event was held and the manner in which both Mahesh and NTR spoke about their relationship and fans was the highlight of the event completely.

The trailer for the film was also revealed much to the pleasure of the fans who were quite thrilled to see Mahesh in a new avatar. A huge number of crowds attended the event taking the craze for the film to the next level.

D V V Danayya produces this film which is opening in a huge number of screens all over on the 20th of this month. Kiara Advani plays the female lead and DSP scores music.