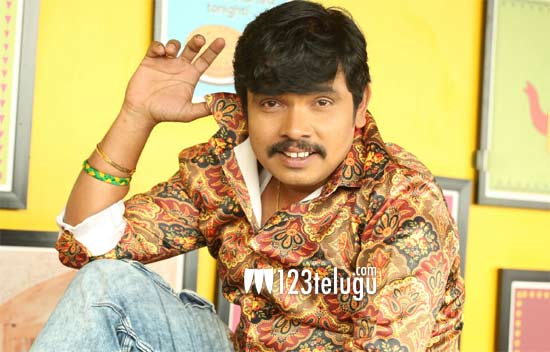 Popular comedy hero Sampoornesh Babu is back with his new film, a commercial entertainer titled Bazaar Rowdy. The film, also starring Maheshwari and Lorani, is directed by Vasantha Nageswara Rao and produced by Sandhi Reddy Srinivas Rao on KS Creations banner under Bodempudi Kiran Kumar’s presentation. Bazaar Rowdy is releasing big in over 300 screens across AP and Telangana on August 20th.

In a latest media interaction while promoting the film, Sampoo said that he is happy to finally have a release after 2 years since the Covid pandemic destroyed film trade. “Bazaar Rowdy will be very different from all the films I have done so far. Old classics like Rangoon Rowdy, Two Town Rowdy and State Rowdy were so popular in their time. I’m happy to have a similar title for my film. Audiences will enjoy the songs and fights in the movie,” Sampoo added.

Sampoo recalled the accident that occurred while shooting for an action sequence in Bazaar Rowdy. “If not for the salt bags below, I would have severely fractured my leg or hand. Even though my producer was ready to halt the shoot, I insisted on continuing as I was excited to be working with senior actors like Sayaji Shinde, Prithvi and late actor Kathi Mahesh,” added Sampoo.

The Burning Star went on to say that Bazaar Rowdy was supposed to release before the COVID-19 second wave. “Even though we got good deals from OTT platforms, our producer was determined to release the film only in theaters. Our producer is passionate about films and he didn’t compromise on the making,” he added.

Talking about his future projects, Sampoo revealed that he has signed a few new films, while ‘Cauliflower’ is ready for release and ‘Sodaraa’ and ‘Dhagad Samba’ are nearing completion. The actor has also signed Siddhu From Srikakulam director’s next project and another exciting project in which he plays 5 characters. Lastly, Sampoo also has a full-on entertainer titled Pudingi Number 1.