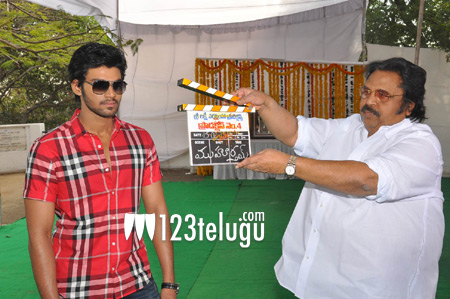 Bellamkonda Suresh’s son Sreenivaas is all set to make his debut as a lead actor in Telugu. Samantha is playing the lead role opposite Sreenivass and V V Vinayak is directing the film. Bellamkonda Suresh is producing the film. This untitled film was launched earlier today in Hyderabad. Dasari Narayana Rao, K Raghavdendra Rao, Venkatesh, Sunil, Siddharth, Dil Raju, Thammareddy Bharadwaj and Gopichand were some of the celebrities who graced the event. Speaking at the event, Dasari Narayana Rao said, “I don’t speak on such occasions, but Bellamkonda Suresh has grown up in my compound. Sreenivaas is a highly talented young man and he has been working really hard for the past few years for his debut. V V Vinayak has taken a bold step to direct a film with a newcomer despite being such a big star.”

The rest of the celebrities wished Sreenivaas and V V Vinayak and hoped that the film will be a big hit. V V Vinayak said that he’ll do his best to make the film a big success. The film is said to be an action entertainer with family sentiment. Devi Sri Prasad is scoring the music and Chota K Naidu is the cinematographer.