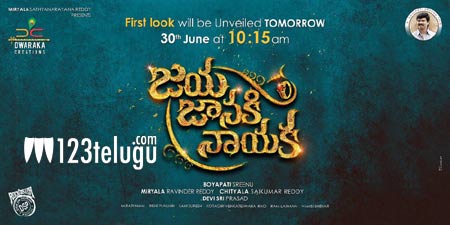 Bellamkonda Srinivas’s new film, Jaya Janaki Nayaka has been in the news for quite some time now. The latest we hear is that the first look teaser of the film will be out tomorrow morning.

This film has Jagapathi Babu, Rakul Preet, Catherine Teresa and many other stars playing crucial roles. Bellamkonda Srinivas will be seen in a six-pack look in this film which is an out and out mass entertainer.

Devi Sri Prasad composes music for this film which will release in August.