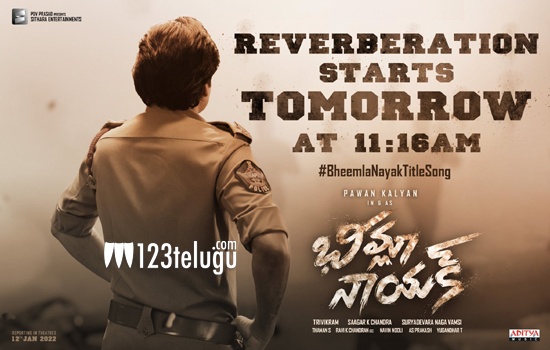 The stage is all set for the grand launch of the much-awaited title song from Pawan Kalyan and Rana Daggubati’s multi-starrer, Bheemla Nayak. The song, composed by Thaman and penned by lyricist Ramajogayya Shastry, will be out tomorrow at 11:16 AM on the occasion of Pawan’s birthday (Sep 2).

Thaman’s blazing background score for Bheemla Nayak’s glimpse video became a rage and set the expectations soaring. The song is expected to be an out-and-out mass number and raise Pawan’s stardom to the hilt. Needless to say, fans are eagerly waiting for the song launch to add merry to Power Star’s birthday celebrations.

Also starring talented young beauties Nithya Menen and Aishwarya Rajesh as the female leads, Bheemla Nayak, an official remake of the acclaimed Malayalam action drama, Ayyappanum Koshiyum, is being directed by Saagar K Chandra and produced by Naga Vamsi under Sithara Entertainments banner. Trivikram has penned the screenplay and dialogues.