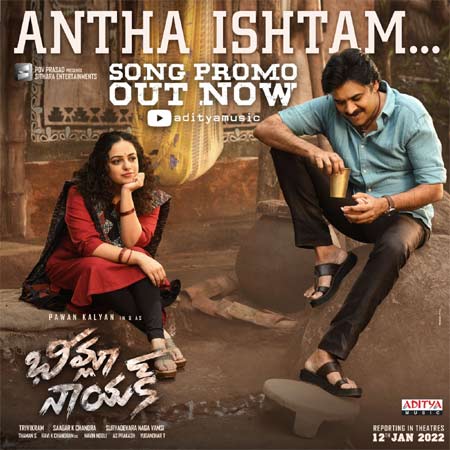 The much-awaited promo for the second song from Pawan Kalyan and Rana Daggubati’s upcoming multi-starrer, Bheemla Nayak, is out this morning. The short promo features legendary playback singer Chithra’s soulful voice. The earnestness in her voice tugs at heartstrings and is sure to make the soon-to-release song an instant chartbuster.

Antha Ishtam song is a love number shot on Pawan Kalyan and Nithya Menen. The song is all about Nithya Menen wondering about Pawan Kalyan’s immense love for her. Ramajogayya Sastry has penned the lyrics and Thaman has composed the song. The full song will be out tomorrow (Oct 15) at 10:19 AM.

Also starring Mollywood actress Samyuktha Menon in a lead role, Bheemla Nayak, an official remake of the acclaimed Malayalam action drama, Ayyappanum Koshiyum, is being directed by Saagar K Chandra and produced by Naga Vamsi. Written by Trivikram, the film is slated for release on January 12 as a Sankranthi festive treat.