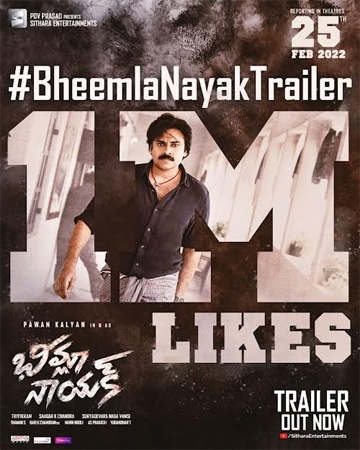 Power Star Pawan Kalyan’s upcoming movie, Bheemla Nayak, which also has Rana Daggubati in a crucial role, is all set to hit the screens on February 25, 2022, worldwide. The theatrical trailer of the movie was released last night and smashed many existing YouTube records.

Today, the trailer has garnered 1 million likes and around 8.5 million views in 13 hours. Trade pundits are expecting that the trailer will create more records by the end of the day.

Nithya Menen and Samyuktha Menon played the female leads in this action entertainer. Directed by Saagar K Chandra, the movie is bankrolled by Sithara Entertainments. Thaman S is the music director of this movie, which is also confirmed to release in Hindi.