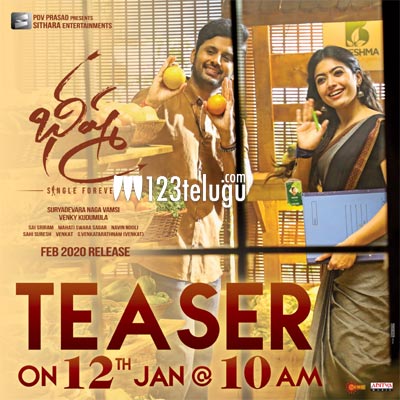 The singles anthem that was released from actor Nithiin’s upcoming film Bheeshma two weeks ago, has been received quite well. And just as we enter the festive cinema zone with Sankranti and major releases around the corner, the film’s team has decided to release the teaser.

A first glimpse of the film was already released two months ago and saw Rashmika and Nithiin in their element. It is to be seen what new will be offered in the upcoming teaser. The teaser is likely to feature in the theatres alongside the Sankranti releases and the teaser of Sharwanand and Samantha’s Jaanu.

Directed by Chalo maker Venky Kudumula, the film is touted to be an entertainer and is a production of Haarika & Haasine Creations.