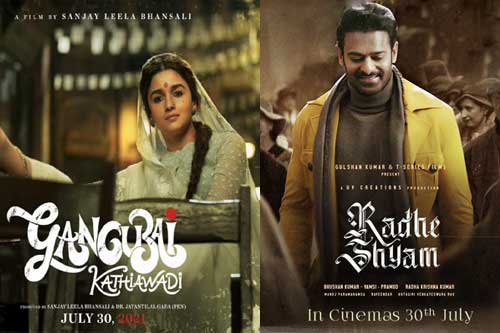 Fans of two of India’s top stars, Prabhas and Alia Bhatt, are going to witness a big clash at the box-office this July. It’s well known that Prabhas’ vintage romantic drama, Radhe Shyam, is slated for release on July 30.

And the makers of Alia Bhatt’s upcoming period biopic, Gangubai Kathiawadi, today announced that the film is hitting screens on July 30, leading to a clash with Radhe Shyam. While Alia’s film may not give a tough competition to Radhe Shyam in the twin Telugu states, it will surely impact the Prabhas-starrer’s box-office numbers in the North Indian markets.

While Radhe Shyam is banking on Prabhas and Pooja Hegde’s popularity, Gangubai Kathiawadi also has the Sanjay Leela Bhansali factor working in its favour. Prabhas’ previous film, Saaho, collected over Rs 130 crore nett across the Hindi belt. Naturally, trade circles are pinning high hopes on his next big pan-India outing. It remains to be seen whether or not any of these two movies will shift the release date in the coming weeks.