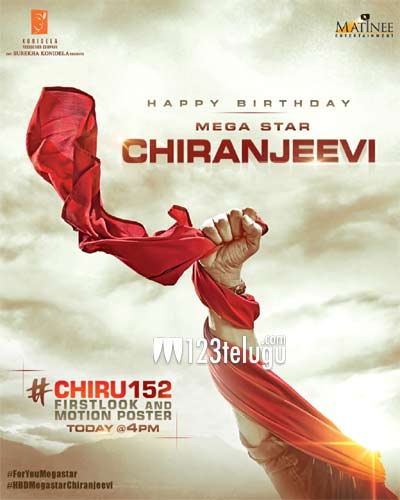 Megastar Chiranjeevi celebrates his 65th birthday today and it’s nothing short of a festival for all his ardent fans. To make this day even more special, the makers of Chiru’s 152nd film under Koratala Siva’s direction will be unveiling the film’s title and a motion poster this evening at 4.

Needless to say, all eyes are on Chiru152’s first look. Expectations on this intense social drama are quite high among fans and trade circles. Chiru is rumored to be playing the role of a Naxalite turned professor in this film, tentatively titled Acharya. The fact that Ram Charan will be seen in an extended cameo in the movie has added more hype to the project.

Ram Charan is jointly bankrolling this much-awaited film in association with Matinee Entertainment’s Niranjan Reddy. Manisharma is scoring the soundtrack and Kajal Aggarwal is the leading lady in the movie.