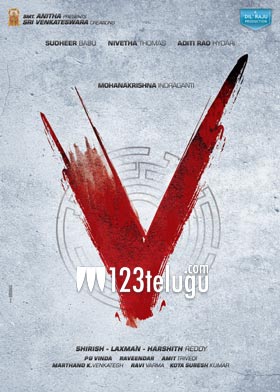 The title logo for director Indraganti Mohanakrishna’s latest film, V, under Dil Raju’s production is out and it has pulled off a huge surprise. Hero Nani’s name is missing on the poster and it led to the fresh speculation that Nani may only be seen in a special cameo in the movie.

V predominantly stars Sudheer Babu, Nivetha Thomas and Aditi Rao Hydari. Contrary to the recent rumors, Nani is not bankrolling the film in association with Dil Raju. It remains to be seen whether Nani will be part of the movie eventually.