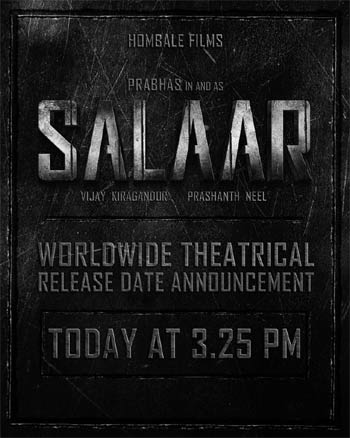 Here’s comes a massive announcement alert. The worldwide release date of Prabhas and Shruti Haasan’s ongoing gangster drama, Salaar, will be announced by the makers this evening at 3:25 PM. Salaar is being made as a pan-India biggie and the film will be released in all the four South Indian languages and Hindi.

Salaar is being directed by KGF director-producer duo, Prashanth Neel and Vijay Kiragandur. The film’s first schedule was wrapped up recently at the Kothagudem coal mines. Both Prabhas and Shruti took part in the first schedule. In the movie, Prabhas plays a General to a mafia lord. Stay tuned for the big announcement.