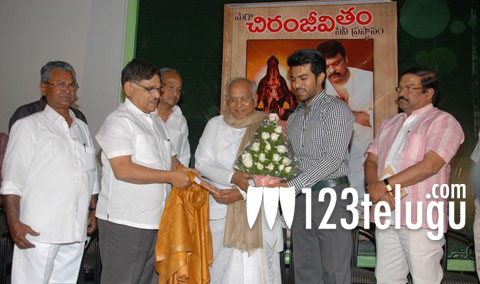 A new biography on Megastar Chiranjeevi’s life has hit the shelves today. The biography has been written by veteran Telugu film journalist Pasupuleti Rama Rao and it’s titled as “Mega Chiranjeevitham”. Pasupuleti Rama Rao has been writing about Telugu cinema for almost four decades and he’s one of the most respected journalists in film industry. At the launch of the book, he recalled that he was the first journalist to interview Chiranjeevi and also stated that he became close to Chiranjeevi and his family since the time of Yamudiki Mogudu. Akkineni Nageshwara Rao appreciated Rama Rao for writing a book which will be quite useful for anyone who wants to know more about Chiranjeevi and his rise in Telugu cinema. Ram Charan and Allu Arvind also graced the event. Talking at the event, Ram Charan said that he had earlier requested his father to pen an autobiography, but he rejected the idea several times. “Despite few offers, Chiranjeevi agreed for Rama Rao’s proposal to write a biography on him. I request Rama Rao garu to write another book on my father and our family will be more than glad to help him in this venture,” Ram Charan said.