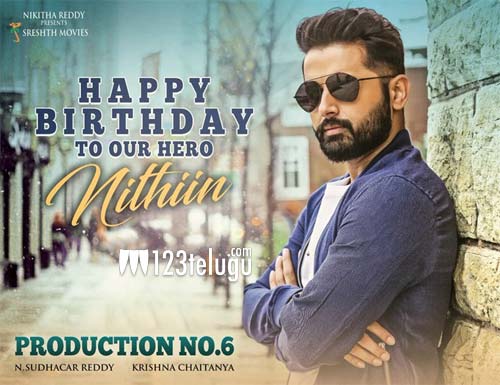 Nithiin celebrates his 35th birthday tomorrow. On the eve of his birthday, the young hero pleasantly surprised his fans by announcing two more exciting films, after the recent announcement of his next film with Chandrashekar Yeleti.

The second project is Bheeshma, under Venky Kudumula’s direction with Rashmika Mandanna as the leading lady. And the third film is an ambitious and the most challenging film in Nithiin’s career. The film will be directed by Nithiin’s Chal Mohan Ranga’s director, Krishna Chaitanya. The project will go on floors towards the end of this year and the theatrical release will be in summer next year.

Announcement 3
My most ambitious and challenging film of my career!!super duper kicked about it..✊
Dir krishna Chaitanya

Announcement 2
After some GAP commercial is BACK#BHEESHMA PAKKA HILARIOUS COMMERCIAL BOMMA 😍😍🔥🔥
Thanku rashmika ‘sir’ for announcing our film!! My mom wants to kill u all for putting ‘single forever’ as the tagline😂 @VenkyKudumula @iamRashmika LETS KILL IT ❤ pic.twitter.com/lC399TPa2W