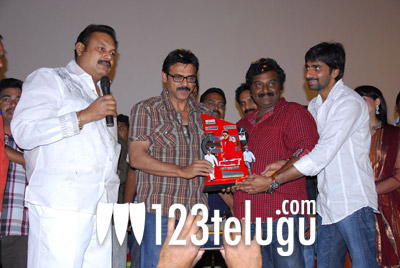 Victory Venkatesh has scored a hit this Sankranthi with the action entertainer ‘Bodyguard’ . The triple platinum disc function of the movie was held in Visakhapatnam today at the V Max theater complex. The event was attended by Venkatesh,Saloni, Ali, Bellamkonda Suresh, Gopichand Malineni, Dil Raju, V.V.Vinayak and Malla Vijaya Prasad.

Venkatesh expressed his happiness at the movie’s outcome and said that Bodyguard will end up as the highest grossing movie of his career. “This shows what happens when good comedy and a good story come together. People will always appreciate such clean family entertainers” ,said Venkatesh.

Dil Raju and V.V.Vinayak appreciated the director and the producer for coming up with a clean entertainer. Director Gopichand Malineni and Producer Bellamkonda Suresh thanked the audience for making the movie a big success.