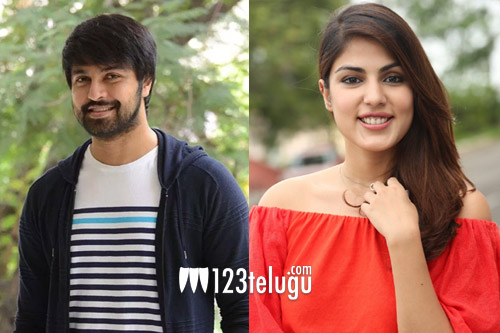 Last month, Megastar Chiranjeevi’s son-in-law Kalyaan Dhev’s second film had its official announcement. The film will be directed by debutant Puli Vasu, while Rizwan Entertainment banner will bankroll it. The regular shooting will commence very soon.

Meanwhile, the latest reports reveal that Bollywood starlet Rhea Chakraborty has been in talks to play the leading lady’s role in Kalyaan Dhev’s film. Rhea had made her Tollywood debut back in 2011 with Sumanth Ashwin’s Thuneega Thuneega.

Rhea won applause for her performance in the recently released Hindi romantic drama, Jalebi. Apparently, director Puli Vasu was impressed with Rhea’s performance in Jalebi and approached her to narrate the script. Although the actress is excited about the story and her character, she is yet to sign on the dotted line. Stay tuned for further updates.