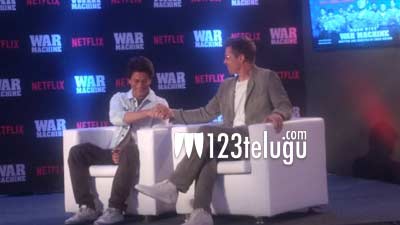 Hollywood superstar, Brad Pitt has silently landed in India without anyone’s knowledge to promote his new film War Machine. Earlier, the media was shocked when a sudden promotional event was held for his film at the last minute.

Reports suggest that all this was done under the supervision of Shahrukh who is also hosting a lavish bash for the Troy star later at his residence. The cream of Bollywood is expected to attend this event which will be looked after by SRK’s wife Gauri Khan.

This is the second time that Brad Pitt has come to India in a long time. Brad Pitt is in news these days because of his high profile with his ex-wife Angelina Jolie.