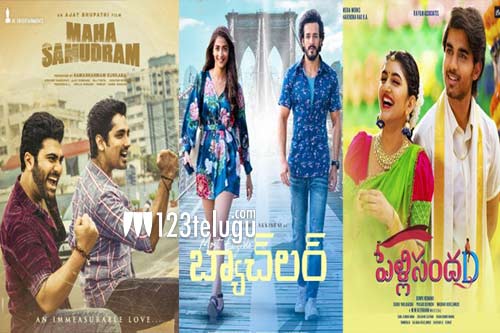 The film industry is booming with releases once again. The Dussehra season saw as many as three films in the form of Pelli Sanda D, Maha Samudram, and Most Eligible Bachelor. Let’s look at how these films fared at the box office last week.

Thanks to the solid music and Pooja Hegde’s craze, this film had good openings and made over 6 crores share on day one. The film’s collections were rock steady during the weekend as the film has made a gross of 24 crores so far. The film will end up as a Dussehra winner and will be a good hit for Akhil.

This film marks the debut of Roshan Srikanth into films and was panned by the critics on day one. But the songs helped the film as the masses and family audience watched this film from day two. The occupancy increased from the second day and saw decent collections over the weekend. It will now end up as an average grosser at the box office.

This film had a solid hype from day one but it did not impress the audience. From day two of its release, the occupancy has fallen down and it did not pick up over the weekend as well. The film will end up as a box office disappointment for Sharwa and Ajay Bhupathi.