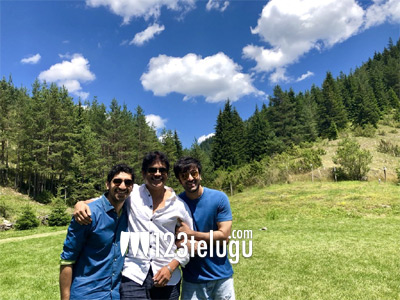 We had recently reported that Nagarjuna is onboard the cast of Karan Johar’s ambitious production Brahmastra, and it also marks his return to Bollywood after several years. The film, directed by Ayan Mukerji, is currently being shot in Bulgaria and Nagarjuna has joined the cast.

Soon after the shoot began, Karan Johar took to Twitter to officially welcome Nagarjuna saying, “We are honoured and exceptionally excited to have the one and only @iamnagarjuna doing an extremely “special” role in our film #BRAHMASTRA !! Directed by Ayan Mukerji @SrBachchan @aliaa08 #RanbirKapoor …thank you sir for your love and your beautiful energy!.”

Now, it remains to be seen what role Nagarjuna is playing in the film, but it looks like the actor is extremely happy to be part of the team, which also has Amitabh Bachchan, Ranbir Kapoor and Alia Bhatt in lead roles. The film is slated for release in 2019.

Thank you @karanjohar, @SrBachchan Ji,Ranbir,@aliaa08,Ayan and the dream Team of @DharmaMovies for making me feel so special and welcome. Loving every minute here in Devin,Bulgaria!! https://t.co/vmvu9uqGfj