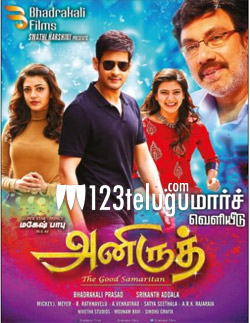 Superstar Mahesh Babu’s high-budget family entertainer, Brahmotsavam, released in summer 2016 and ended up as a colossal failure. Despite featuring an ensemble cast comprising Kajal, Samantha, Pranitha and Sathyaraj etc, the film was heavily criticized for its lackluster script penned by the film’s director Srikanth Addala.

We had earlier reported that Brahmotsavam has been dubbed in Tamil as Anirudh. The latest update is that the Tamil version will hit the screens in March and the exact date of release will be announced soon. Popular Tamil distribution house Bhadrakali Pictures is releasing Anirudh across Tamil Nadu.