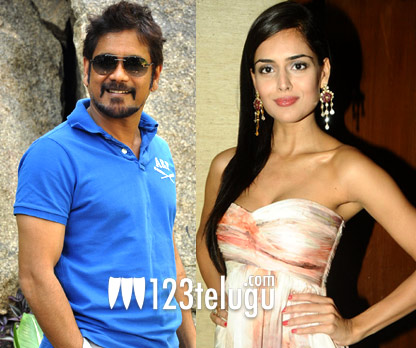 Brazilian model turned actress Nathalia Kaur has bagged yet another item number in Telugu. This time she’s shaking a leg with Nagarjuna in the latter’s upcoming film titled Bhai. Apparently, a part of the song has already been shot in Bangkok and the remaining part of the shoot is going to take place in Hyderabad. “Shooting with #NAGARJUNA sir was such a delightful experience! Very happy and honored for having this opportunity!,” Nathalia posted on Twitter. She’s currently in Hyderabad to perform at MAA Music Awards which will be held later tonight in Shilpakala Vedika. She shot to fame last year when RGV introduced her in an item number in Department. She’ll soon be seen in another item number in Naveen Chandra, Piaa Bajpai starrer Dalam.

Veerabhadram is directing Bhai and Nagarjuna is producing the film under Annapurna Studios banner. Richa Gangopadhyay is playing the lead role opposite Nagarjuna. Devi Sri Prasad is scoring the music for this mass entertainer.