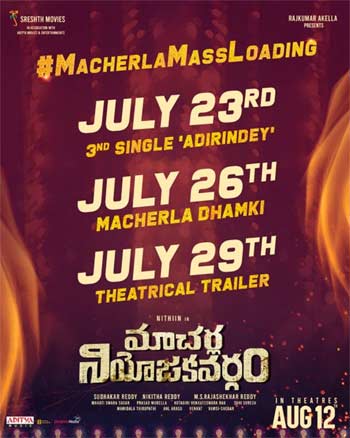 Young actor Nithiin is all set to entertain the audience with his next flick Macherla Niyojakavargam on August 12th. The item number Ra Ra Reddy featuring Anjali took the internet by storm and created very good hype around the film. Much thanks to the Raanu Raanu Antunde Sinnadho bit from the actor’s cult hit Jayam.

Highly pumped up by the phenomenal response the team is now ready to treat fans with a bunch of updates. The third song Adirindey will be out on July 23. On July 26th a special update titled Macherla Damki will be revealed. On July 29th the theatrical trailer of this action drama will be released by the team.

Nithiin is playing the role of an IAS officer in this film being directed by MS Raja Shekhar Reddy. Krithi Shetty and Catherine Tresa are the female leads. Samuthirakani plays the main villain, while Mahati Swara Sagar is the music director. The film is produced by Sudhakar Reddy and Nikitha Reddy.