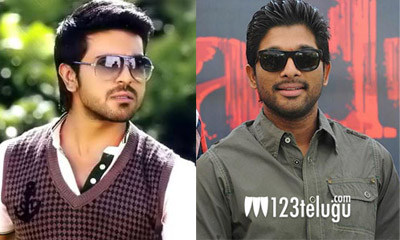 Mega Power Star Ram Charan Tej says that his cousin Stylish Star Allu Arjun is a better dancer than he is. This was his answer when a journalist asked the question at a press meet held today in Annapurna Studios. “Bunny is a more complete dancer and I respect his abilities a lot”, said Charan.

He was celebrating his birthday today,a day in advance, as the unit is set to travel to Pollachi for the shooting of the final song from the film ‘Raccha’. The movie is set to release in the first week of April and Charan says that Raccha will be his career best entertainer. “Raccha will be a full meals entertainer for my fans. The movie has come out really well and I am looking forward to its release”, said Charan.

Sampath Nandi is the director of this flick and the movie has Tamanna as the heroine. Mega Supergood Movies Banner has produced the flick. Mani Sharma has scored the music for this movie.