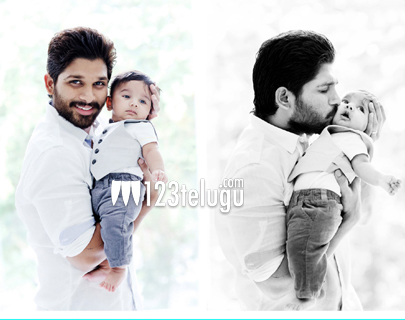 If the ongoing buzz in the film and social media circles is to be believed, Allu Ayaan, son of Allu Arjun and Sneha, may appear in a sweet cameo in Stylish Star’s upcoming film ‘S/O Sathyamurthy’. Even though the news has not been confirmed by the production team or official sources, fans are already celebrating this special moment.

Allu Arjun and Sneha Reddy tied the knot in 2011 and the couple gave birth to Allu Ayaan in 2014. The Allu family often releases stills of the little boy on several occasions, the recent one being Holi. Star kids making a silver screen debut is nothing new in Telugu films. If this special news indeed becomes true, it is no exaggeration that fans’ joy will see no boundaries.

At present, ‘S/O Sathyamurthy’ is finishing its post-production formalities and the audio will be launched on 15th March. The makers are planning to release this film on 2nd April.