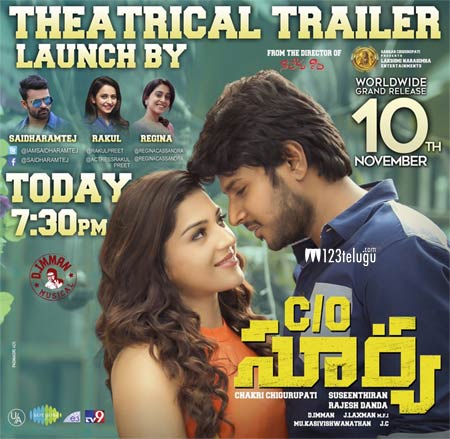 Sundeep Kishan and Mehreen Pirzada’s Telugu-Tamil bilingual, Care Of Surya is scheduled for a November 10th release. The film’s Tamil trailer, which was released around a few days ago, has been getting a good response on social media.

Now, the latest update is that the film’s Telugu theatrical trailer will be unveiled today at 7:30 pm. The pre-release event of the film will be held tomorrow in Hyderabad where young heroes Nani, Nikhil and Sai Dharma Teja are expected to grace the event.

Directed by Suseenthiran, the film is titled as Nenjil Thunivirundhal in Tamil. Chakri Chigurupati, who had produced Nikhil’s Swamy Ra Ra, is releasing the movie in Telugu.