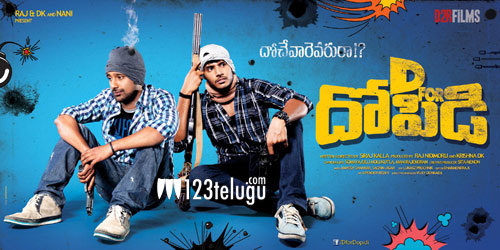 ‘D for Dopidi’ is one project in the recent times, which has generated enough curiosity among the audience. The fact that, Nani has bought half of the stake in the movie has further raised the expectations on the movie.

The censor formalities of ‘D for Dopidi’ were completed today and the film was awarded ‘U/A’ certificate. This movie is going to be a crime thriller with lots of comedy nicely blended in to the story. A promotional song on Nani was released recently for the sake of publicity and all the post production formalities have been completed for the movie. Dil Raju has bought the rights of entire AP and makers are planning to release the movie in the last week of November.

Sundeep Kishan and Varun Sandesh are the male leads in the movie and Melanie is debuting as a heroine with this film. Siraj Kalla is the director of the movie and Mahesh Shankar has composed the music. Krishna DK and Raj Nidamoru have jointly produced the movie.