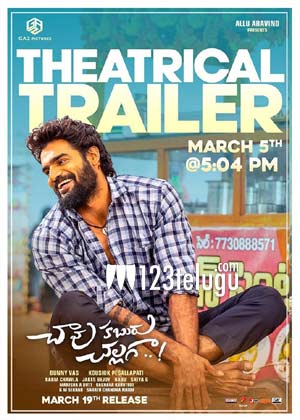 The stage is all set for the launch of the theatrical trailer for young stars Kartikeya and Lavanya Tripathi’s upcoming comedy drama, Chaavu Kaburu Challaga. The trailer will be out tomorrow (March 5th) at 5:04 PM. While Kartikeya plays a mortuary van driver, Lavanya plays a nurse in the movie.

Chaavu Kaburu Challaga is a concept-oriented film being made with a unique backdrop. The film is being directed by debutant Koushik Pegallapati and produced by Bunny Vas under GA2 Movies banner. The film is slated for release on March 19. Star hero Allu Arjun will be the chief guest at the film’s pre-release event on March 9.