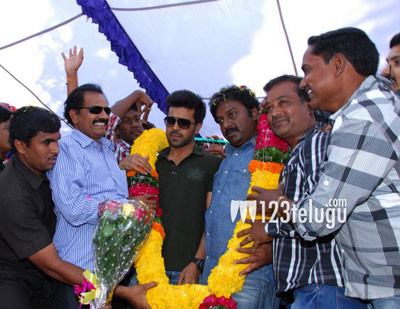 Mega Powerstar Ram Charan received a great reception from fans yesterday in various parts of the state. The young star took a tour of a few theaters in Andhra Pradesh and he was received with enthusiasm at all the venues.

Charan seemed to be in good spirits and he interacted with people jovially. He also sent out a message to his admirers that mass masala entertainers can be expected from him on a consistent basis. ‘Naayak’ brought in superb collections during the Sankranthi holidays and the movie is expected to touch the 40 Crore mark with ease.

Kajal Aggarwal and Amala Paul were seen as the heroines in this film and Vinayak is the director. Danayya produced this movie.