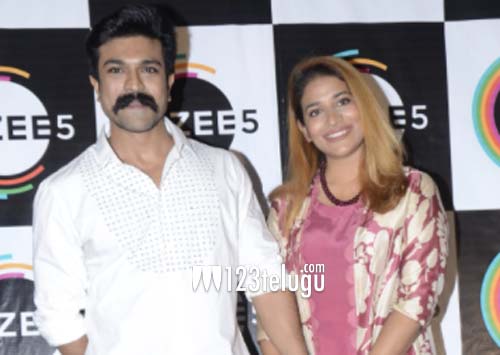 It is a known fact that mega daughter, Sushmita Konidela and her husband are making their debut as producers with the web series Shoot-out At Alair. Today, at an event held in Hyderabad, Mega Power Star Ram Charan released the web series’ showreel.

Speaking about his sister, Charan said “Since my father’s debut in movies, our family members have been into experimentation in different ways in the entertainment industry. Sushmita is a fighter in the OTT space. She was a stylist on ‘Rangasthalam’ and had also worked on ‘Khaidi No 150’. Although we can’t show our frustration on family members when they go wrong on set, I have shown anger at ‘Akka’ at times. She has been my biggest support. I am confident that she will succeed in the web series.”

Sushmita Konidela and her husband Vishnu Prasad have produced it on Gold Box Entertainments. The action-drama will be streamed on ZEE5 exclusively from December 25. Srikanth and Prakash Raj are its lead actors. The series is directed by Anand Ranga.