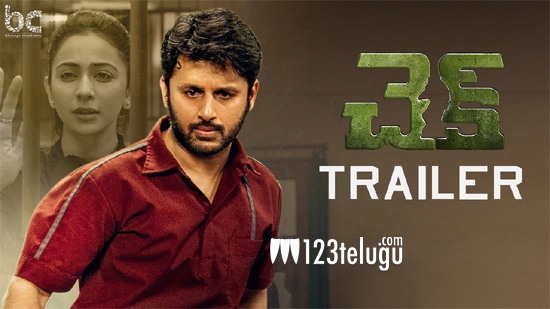 It is a known fact that Nithin is doing a film in the direction of Chandrasekhar Yeleti. Titled Check, the trailer of the film is out now and has gone viral already.

The film is devoid of all commercial elements and has a serious backdrop. Set amidst a jail setup, Nithin is shown in a new avatar and plays an inmate. The trailer’s tone and the way it is narrated with a gripping screenplay is quite good.

The manner in which Yeleti introduces key characters is quite nice to see. Rakul plays a lawyer and Priya Varrier looks cute in her new look. Even though the film is serious, the action episodes have been designed so well and will impress the masses.

The film has music by Kalyani Mallik and the reason for which Nithin is jailed and what’s the whole crime angle will be known soon when the film releases on February 26th.