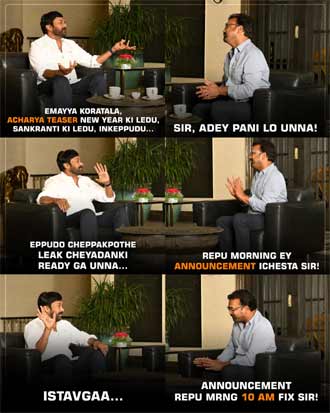 Megastar Chiranjeevi has taken the social media game to the next level. The manner in which he is playing with words is so good to see. Today, he tweeted that he had a serious discussion about his film Acharya and he will update that by 6 30 PM.

So now, Chiru has posted another meme that reads the conversation of Chiru and director Koratala Siva. As seen in the picture above, Chiru is shown asking about the teaser date and Siva has obliged by saying that the announcement date will be revealed by 10 am tomororw.

This has created a huge buzz for the film and also shows that Chiru is the king when it comes to making plans for his films.