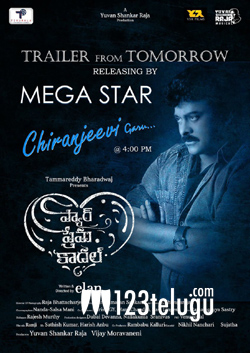 It’s been reported already that music composer Yuvan Shankar Raja’s maiden production venture, Pyaar Prema Kaadhal, will be releasing in Telugu with the same title. The film released a few weeks back in Tamil and turned out to be a decent hit.

Meanwhile, the latest update is that this film’s Telugu theatrical trailer will be unveiled by Megastar Chiranjeevi tomorrow at 4 PM. Chiranjeevi being a huge star and promoting a small film like Pyaar Prema Kaadhal is a kind gesture.

Young Kollywood stars Harish Kalyan and Raiza Wilson are the main leads in the movie. Young short filmmaker Elan is the film’s director. Tirumala Productions will release the film in Telugu in association with Yuvan Shankar Raja.