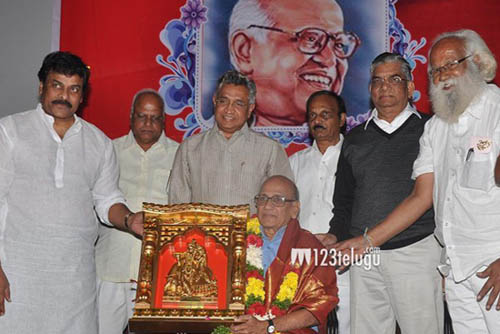 Megastar Chiranjeevi revisited his yesteryear’s comic hit ‘Manthrigaari Viyyankudu’ at the ongoing Bapu film festival at Prasad Labs yesterday. Reminiscing about his association with the auteur after the screening, Chiru said that it was Bapu who auditioned him for Pardhu’s role in ‘Mana Vuri Pandavulu’ and that he used to put in extra efforts to impress Bapu.

Comparing Bapu with the world famous painter Picasso, Chiru also said that Bapu is a pride of Telugu community and that he was an unparalleled expert in drawing portraits of several Indian gods. Chiru also revealed that he always wanted a portrait of him and his wife to be drawn by Bapu.

Prior to the screening, an art gallery comprising of Bapu’s collection was also inaugurated. The film festival is being organized by the Hyderabad Film Club as part of Bapu’s first birth anniversary celebrations.